Capybaras With Other Animals

Capybaras get along with many animals. They are the epitome of chill and relaxed and other animals do not feel threatened by the grazing capybaras either. But which animals get along best with capybaras? Let’s find out.

Dogs are generally playful and while they might be spooked out at first about the presence of a capybara, they generally have no problems and get along well. There are instances when dogs and capys enjoy playing in the water together.

Despie a famous video of a pelican who tries to swallow a baby capybara circulating around the internet, pelicans do not eat capybaras, even baby capybaras are too big for them. That pelican was inexperienced as it was living in a zoo in Japan and the capybara was not in danger at any time.

Guinea pigs are the pets that are most closely related to capybaras. They are both rodents from the Caviidae family, they are both quite calm and their fur is also similar. What is not similar is their size, a guinea pig is on average 30 cm long and weighs 1 kg while a capybara is over one meter long and weighs 40 times more than a guinea pig. They do get along but don’t have much in common. 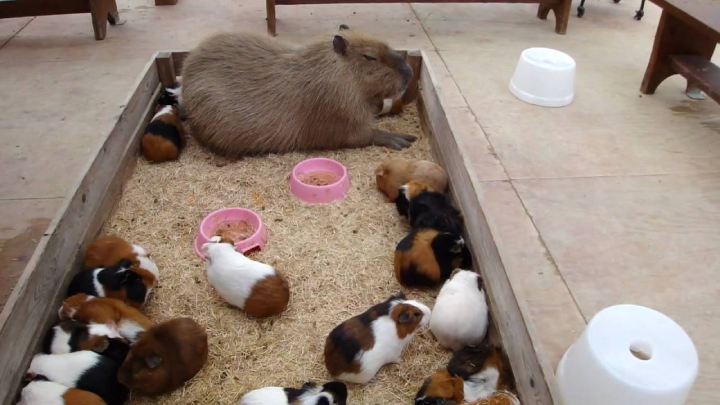 Cats are generally not bothered by capybaras, in fact there have been many reports of capybaras and cats getting along well. They both love being outdoors, they both can sit and do nothing for hours, the main difference is the water; while cats dislike it, capybaras adore it.